Diamonds in the Rough 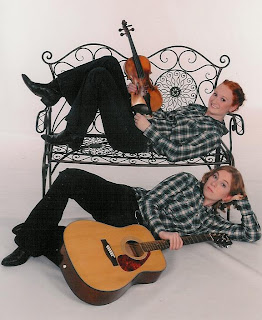 Join in on the excitement with Natalie and Victoria as they have been invited to leave their native Indiana to work and play their music for the summer on a first-time trip to Alaska!
Diamonds in the Rough is a lively and family-friendly fiddle and guitar duo based out of Avon, IN. Fiddler Natalie Grimes (“Nat”) is an accomplished and award-winning fiddle player, having recently captured 5th place in the Traditional category of the Grand Master Fiddler Championship held during the International Bluegrass Music Association Convention in Nashville, Tennessee. She has also won other awards around the state of Indiana for her innovative and hot fiddle playing. With a firm foundation in classical violin as well, Natalie is currently the Assistant Concertmaster of the Hendricks Symphony Orchestra in Hendricks County, Indiana. She was also the 2009 winner of the Hendricks Symphonic Society’s Youth Concerto Competition.
However, the addition of bluegrass, and later Celtic, fiddling has led Natalie to be in great demand at a wide variety of venues including: Indiana State Fair Pioneer Village; Indiana Convention Center- national 4-H leaders conference; Glasgow Highland Games in Lucas, KY; Columbus (IN) Scottish Festival; Columbus Ethnic Expo; Indiana State Poultry Association’s annual federal and state legislative banquet at the Indiana Roof Ballroom; local fairs and historic movie theaters; as well as at numerous other church, corporate, and private events around the Midwest, as half of the Grimes Girls duo. More information available at http://www.grimesgirls.com/.
Victoria Ingersoll (“Vicka”) is the other half of Diamonds in the Rough. At age 24 she has decided to jump into a new challenge. Victoria played classical guitar for many years, but it wasn’t until recently, when Natalie approached her with the idea of forming a band, that she played bluegrass guitar. Victoria has learned quickly and is looking forward to performing on the road.
Although the girls are not sisters, they might as well be. Their sisterly banter on and off stage, as well as their unique blend of voices, stands to keep the crowd guessing on what to expect next from these two young “gems”. Diamonds in the Rough is ready to shine all the way from Indiana to Alaska!

Diamonds in the Rough
Howdy, and welcome to our blog! We are "Diamonds in the Rough". Nat is the red head and Vicka is the blonde. We perform bluegrass, Celtic, and Gospel music. Nat is a 10 year 4-H member, and fiddler for The Grimes Girls. Vicka, although new to the world of performing, is excited about the adventures ahead. To learn more about the girls visit the "Our Story" page.

Diamonds in the Rough